Rutgers wrestling was designated No. 11 in the latest 2020-21 preseason rankings by Win Magazine. 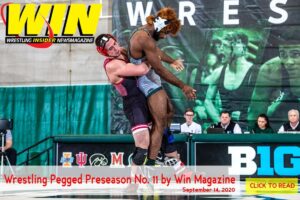 The Scarlet Knights produced another successful dual season last winter, as its 10-7 record in 2019-20 marked the 14th consecutive winning campaign for the RU and the 13th since head coach Scott Goodale took over the program in 2007. RU also finished ranked in the NWCA Coaches Poll for the ninth time under Goodale’s leadership.

Rutgers produced five NCAA qualifiers last season, the sixth consecutive year the program had five or more qualifiers for the championships. Janzer, Nicolas Aguilar (125), Sammy Alvarez (133), Michael VanBrill (157) and Jordan Pagano (197) were all set to compete at the 2020 NCAA Championships in Minneapolis before the tournament was canceled due to COVID-19.