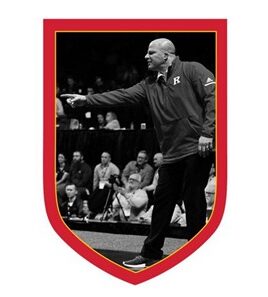 Another major development has been set for The Scarlet Knights Wrestling Club (SKWC) with the announcement that long time Rutgers University Wrestling Coach John Leonardis has taken the reins as SKWC’s full time Executive Director starting May 1, 2021.  John is responsible for the day-to-day operations of the SKWC which includes the mentoring programs, social events, fund raising, and managing the Resident Athlete program.

Rutgers University Wrestling Coach Scott Goodale stated “John Leonardis and I started coaching at Rutgers together and as the SKWC mission and complexity has grown we could not have a better choice than my friend and long-time partner to bring SKWC and Rutgers Wrestling to another level.”

SKWC Co-Presidents Tom Perrotti and Josh Gross noted, “Many of the building blocks are coming together quickly with Coach Leonardis becoming the SKWC’s leader and Myles Martin coming aboard. John was at the SKWC from day one and his background as a 14-year coach of Rutgers, as a Division I competitor in college, and as a leader of young men off the mat, made him the clear choice to be our Executive Director.”

Coach John Leonardis Biography:  John Leonardis has spent the last 14 years as an assistant coach for Rutgers University, and has been instrumental in developing the Scarlet Knights into a premiere Division I NCAA wrestling program. Prior to 2006, Rutgers produced one All American in 24 years. During Coach Leonardis’ tenure the Scarlet Knights produced 15 NCAA All Americans, including Rutgers’ first two NCAA Champions, in 2019. Over the past eight consecutive seasons, Rutgers has produced at least one All American. During this time, from 2016-20 Rutgers had two All Americans and in the 2020-2021 season, the Scarlet Knights had a record three All Americans including two 4th place finishers. Over the past three NCAA National Tournaments, Rutgers has finished 11th, 9th and 13th in the team standings. During his tenure, Coach Leonardis has coached four of the top 10 all-time winningest wrestlers Rutgers and seven wrestlers who achieved the milestone of 100 career wins or more. Coach Leonardis mentored 11 Academic All Americans and numerous All Big Ten Academic selections. Coach Leonardis has been involved with the SKWC Inc. since its formal inception in 2010. He was on the Board of Trustees and served as the first board secretary.

Before coming to Rutgers, John Leonardis was a three-year varsity wrestling letter winner at Lehigh before graduating in 1997. He was an EIWA Champion in 1996 in the 190-pound weight class. The Sea Girt, N.J., native played football and wrestled for Blair Academy in Blairstown, N.J.

During his wrestling career, Leonardis was a four-time National Prep place winner and champion and an Amateur Wrestling News All-American. Prior to Rutgers, Coach Leonardis was the head coach at Peddie School in Hightstown, N.J. and was the New Jersey Wrestling Federation Coach from 1997-2007, receiving Coach of the Year honors three times from the Trenton Times.

Coach Leonardis resides in Sea Girt, NJ with his wife Cate and children, Luke and Olivia.

SKWC – The mission of the SKWC is to support Rutgers University’s wrestling program and enhance the ability of fans to experience an elite level of wrestling and entertainment. Support us at: https://scarletknightswrestlingclub.com/donate-to-skwc