NJ.com interviews Coach Goodale about the achievements of RU Wrestling from January 2008 up to the 2019 NCAA Wrestling Tournament. The SKWC is noted as a key asset to the program. Video interviews with Ashnault & Suriano.

Scott Goodale has told the story many times.

What he hasn’t always told, though, is that crowd briefly dwindled by one – him.

“The clock broke down, so I had to run out to my car and get a portable clock to finish the dual meet,” Goodale recalled earlier this week. “I was humiliated. I was so embarrassed – my family is there, this was a big step going from Jackson, where everything was done right because wrestling is so important, to now this.”

Mercifully for Goodale and Rutgers, it’s been mostly uphill since.

The portable clock is long gone – Rutgers used it during practices for a few years before throwing it out – as are the Scarlet Knights’ modest days wrestling in front of friends and family in the Barn. Rutgers competes in the RAC now in front of thousands of fans. It’s a member of the Big Ten. It has put eight All-Americans on the podium and one wrestler in the national final in the last five seasons.

And this weekend, the Scarlet Knights will have two serious national title contenders – Anthony Ashnault and Nick Suriano – on the mat when the NCAA Championships begin Thursday in Pittsburgh, as well as a chance to secure the first top-10 team finish ever at nationals.

A program that has been fueled by breakthrough moments may be about to enjoy its biggest one yet.

“It’s come a long way, with a lot of help, a lot of different people involved, a lot of administrators,” Goodale said. “A lot of football coaches, basketball coaches. And here we are today.

“I always thought we’d get it to this point.”

The story of this era of Rutgers wrestling is well-known. The program was in danger of being cut. Former athletic director Bob Mulcahy sat down with Goodale, then the head coach at Jackson Memorial High, to hear his ideas on how Rutgers could harness New Jersey’s love for wrestling, and the talent that resides in the state, and become a force on a national level. Mulcahy is so impressed, he decides to offer Goodale the job. Goodale and assistant coach John Leonardis take over, and the climb begins.

So well-known, perhaps, that people lose sight of how remarkable the whole thing has been. Mulcahy rolled the dice and hired a high school coach who had a grand vision. A dozen years later, the vision appears to be coming together. 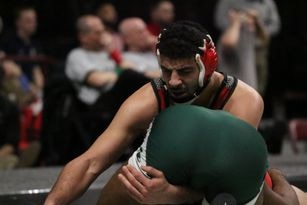 Plenty of people assumed Nick Gravina’s only road to the NCAA Championships this year would be as a spectator.

“I know a lot of people didn’t think it (would happen). And there’s still a lot of hate. But that’s fine, that’s part of it,” Goodale said. “That stuff kind of motivates me, believe it or not.

“I truly believed we’d get it here. I was probably naïve to think we’d do it a lot sooner, not so much in the Big Ten, but in the EIWA. We won a lot, but I thought we were going to have more All-Americans. … I didn’t realize how hard that tournament could be, how many breaks you have to catch.”

It has not been a straight ride to the top. Goodale admits the program had some rough edges in his first few seasons.

After seeing in-state products like Scott DelVecchio and Ken Theobold develop into All-Americans under the program’s current system, he wonders what could have been if his first wave of recruits – wrestlers like Scott Winston, Trevor Melde and Joey Langel – had been able to compete with the advantages the current team has, like the Scarlet Knight Wrestling Club, the New Jersey Regional Training Center with Princeton, a nutritionist and sports psychology, among other things.

Instead, they were the athletes who took a chance and bought into Goodale’s vision at the beginning, when the program was not yet full-funded, at a time where winning and generating excitement short-changed the discipline and culture, providing a foundation for success without enjoying it themselves.

Rutgers then truly began to turn the corner, most believe, thanks to two additions that transformed the program.

The first was Ashnault, who was a game-changing recruit after becoming the first four-time undefeated state champion at South Plainfield, and has become the face of the program as a three-time All-American and Big Ten champion.

“It’s amazing the attention that kid gets, and it’s amazing how he’s been able to handle it. I know there were times he struggled with it,” Goodale said. “He’s the closest thing I’ve ever been around to a professional quarterback. I’m not comparing him to LeBron James, but in our world, in this state? And Nick is right with him.”

The second was associate head coach Donny Pritzlaff, a three-time state champion at Lyndhurst and two-time national champion at Wisconsin that Goodale was able to hire away from Michigan in 2014.

“I went all-in on getting Donny Pritzlaff. All in. That was the real big deal for me,” he said. “This is a guy that I respect as a person, first and foremost. I think he’s one of the best coaches in the country. Every job that comes open, they come after him.”

There are some head coaches who would shy away from hiring an assistant with a bigger name and more credentials than them. But that is what Goodale was looking for.

“I wanted someone to say, ‘This is what we have to do,’” he said. “Donny has been around the best guys in the country. He’s had all these national champs he’s coached. I wanted someone different.”

‘THERE’S SO MUCH MORE WE CAN DO’

When Goodale arrived at Rutgers, he was a high school coach leading a niche program.

Now, he leads arguably the most successful athletics program at the university and is a public figure on par with football coach Chris Ash and men’s and women’s basketball coaches Steve Pikiell and C. Vivian Stringer.

Not that he dwells on it much.

“I don’t look at all of that stuff, to be honest,” he said. “I’m proud of it, I’m happy, there are a lot of people behind that. But for me, I didn’t enjoy the Big Ten Championships. It was the next event. It was the next day. I don’t know if that’s good or bad, because you probably should enjoy winning at that tournament, having Big Ten champs. But for me, it’s always the next event, the next competition, what’s the training schedule going to be like. I always turn my attention to that next thing. But every now and then, I’ll sit there and look at the arena and say, ‘This is awesome.’”

That approach is why Goodale won’t get too high or low based on how this weekend in Pittsburgh shakes out.

Goodale’s long-term vision has always been for Rutgers to consistently compete for team trophies at nationals – finish in the top-4. A program typically needs four or five All-America candidates to be in that mix. Rutgers is not there yet. But the combination of a champion (or two) and the new practice facility set to open this summer will get it closer.

And not matter what, it’s a long way from that broken clock.

“If this were to happen, it would be first and foremost a really big deal for those guys. They deserve it. You get what you earned, and they’ve put themselves in this spot to do it. There’s a lot that goes into it,” Goodale said. “It would be awesome, unbelievable. It would be a culmination – from a personal standpoint, a staff standpoint … you can do it here.