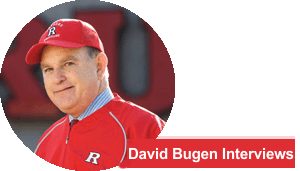 The following is one of a series of interviews that David Bugen has had with Rutgers wrestlers, coaches, and the SKWC Staff. The interview below is with Brian Murphy, the new Volunteer Coach.

Brian: Thanks. It is really great to be in New Jersey. I am excited.

David: Please provide a summary of your wrestling background.

Brian: I grew up in Carol Stream, Illinois and attended Lombard North. My youth coach was Sean Bormet, the current head coach at Michigan. He was a major factor in my decision to attend Michigan. In high school, I was fortunate to win Fargo as a cadet and place second as a junior. Additionally, I twice finished as a state runner-up.

David: How was you career at Michigan and what did you do last year?

Last year, I was on the Michigan staff as an Undergraduate Assistant and earned my degree as an English major. I was a workout partner for the middleweights and had a great opportunity to watch the coaches and learn from them. My experience as an undergraduate assistant motivated me to continue to compete and become a coach.

David: From a coaching standpoint, what did you learn last year?

Brian: I watched the coaches interact with the wrestlers to establish a focused mindset with each wrestler. It is important not to cloud a wrestler’s mind. In addition to one’s mindset, it is essential to keep a wrestler relaxed, help them maintain high energy, and avoid placing undo pressure on themselves. The goal is to develop wrestlers so they love to compete.

David: What made you leave Michigan and join the Rutgers staff?

Brian: In order to build my coaching resume, I needed to get out of my comfort zone and develop myself. I wanted a way to grow, learn and compete. As Donny was one of my coaches at Michigan, I trusted him and knew that I could learn from him. He was the primary reason I accepted the position. In addition, it was important that Reece Humphrey was the Head Coach of the NJRTC. Reece has a great reputation and was a factor in my decision.

David: You mentioned competing. What are your plans and what areas do you want to work on?

Brian: I am training now and hope the Schultz will be my first tournament. I weigh between 72 and 75 kilos and hope to compete in the 74 kilo class, That’s about 163 pounds. I hope that Reece will help me improve my set-ups as well as my finishing technique.

David: What will be your role at Rutgers?

Brian: As a Volunteer Coach, my main responsbilty will be as training partner for the middle and upper weights. By working out with the undergraduates, I will help them enhance their skills and improve on their weaknesses. I expect to provide regular feedback to the coaches and follow their guidance for the practice plan. I will also review film with the coaches and wrestlers to strategize how to wrestle different competitors. Finally, if given the opportunity, I hope to promote the team and build the Rutgers brand.

David: Any final thoughts on the Rutgers team and being in New Jersey?

Brian: It is great to be here and learn from successful coaches. The coaches were very honest when they recruited me for this position. And, they have followed through on everything they promised.

The coaches know what they are each good at, and they each focus on their strengths. All signs indicate that Rutgers is moving in the right direction. We have a very good chance of winning a team trophy this year. Considering the competition and the long histories of the top programs, it is amazing how far Rutgers has come in such a short period of time.

David: Thanks Brian and we look forward to seeing you at the RAC as well as competing on the international circuit.