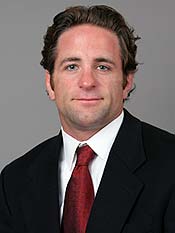 Pollard joined the Scarlet Knights after spending seven seasons as an assistant coach at The College of New Jersey under legendary coach Dave Icenhower. While at TCNJ, Pollard helped the Lions reach new heights as 18 wrestlers earned All-America honors under Pollard’s tutelage. For his successes at TCNJ, Pollard was named NCAA Division III National Assistant Coach of the Year in 2007.

Prior to accepting the position at TCNJ, Pollard was a three-year varsity starter at Rider University. While at Rider, Pollard was a two-time Josh Hanson Award winner, given to the wrestler who demonstrates exceptional leadership, work ethic and academics.

A placewinner at the Prep Nationals as a student at the Peddie School, Pollard was a New Jersey State qualifier. A two-time first-team All-County selection, he was also a three-time County Champion and earned Most Outstanding Wrestler honors at the Mercer County tournament.