In a shocking move, the executive board of the Olympic Committee announced that they had voted to eliminate wrestling from a core group of 25 sports for the 2020 Games.

You are here: Home / Olympics / Elimination Of Olympic Wrestling Is Simply Bad Business

The International Olympic Committee (IOC) sent a clear message to the world’s wrestling community yesterday, “You have been weighed, you have been measured, and you have been found wanting.”

In a shocking move, the executive board of the Olympic Committee announced that they had voted to eliminate wrestling from a core group of 25 sports for the 2020 Games. Wrestling has been an Olympic staple since the modern games were started in 1896, and can be traced back to the original ancient games of Greece almost 3000 years ago. Athletes from 71 countries have competed in the sport which comes in two forms, Greco-Roman, that allows the use of only the upper body; and freestyle, in which athletes can use their legs.

29 countries won medals in wrestling during the 2012 London Games and yet the the sport must now fight for its existence to be included over others such as: baseball/softball, karate, squash, and wakeboard. Of course none of these sports has the history of wrestling, which many rank among track and field as the foundation of Olympic competition. 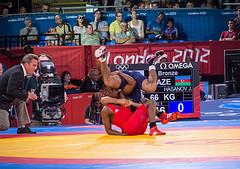 Will London 2012 go down as one of the last times the world was able to experience wrestling on the grandest stage?  (Photo credit: simononly)

Michael Novogratz, principal and director of Fortress Investment Group and of co- chairman of the U.S. Wrestling Foundation, which oversees the sport’s development, believes the sport was dropped because the world wrestling community was not proactive enough in creating allies within the Olympic committee.

“The IOC has a pretty arcane set-up. Even though the NBC contract pays for 70% of the Olympics, the United States only has 3 of 115 representatives on the general board, and none on the 15 member executive board,” Novogratz claims. “The [executive] board is dominated by central European representatives whose countries have very little wrestling tradition. It’s very incestuous and sports are forced to lobby the committee members to stay in favor,” he adds.

When it comes to wrestling, the responsibility for this lobbying falls on the the International Federation of Associated Wrestling Styles, known as FILA, which oversees the sport internationally. While FILA claims that it was essentially blindsided by the IOC’s decision, Novogratz feels differently:

“FILA dropped the ball, it’s as simple as that. They should have been all over the committee and they instead lost its support due to a feeling of entitlement; they took for granted that wrestling has always been a staple of the Olympics.”

Yet Novogratz, who wrestled in collegiately at Princeton University, and his colleagues know that the only way to save the sport now is to galvanize the wrestling community both within the United States and internationally and put pressure on the IOC to continue and sponsor the sport.

“We have to find a collation of the willing among the Russians and Iranians to help out. The three countries (Japan, Turkey, and Spain) that are up for hosting the Olympics in 2020 all have tremendous wrestling traditions. It would be devastating for any of them if they were allowed to host the Olympics but not compete in the sport which they have the best chances of winning in,” said Novogratz.

Within 24 hours of the announcement, Novogratz claims his growing group of allies has already raised $500,000 in support of what will surely be a long battle with the IOC to save the sport.

“By all measurable criteria, wrestling should be within the top 5 of all sports when it comes to the Olympics, much less that top 25,” exclaimed Novogratz. “Moreover, it’s fantastic on a host country’s bottom line, you don’t need to build a new stadium and it always sells out. It’s a win-win for everyone, but the IOC doesn’t seem to get that,” he adds.

Whatever the case, in eliminating wrestling, the International Olympic Committee has steered up a hornets nest of supporters who are  seemingly ready to do anything in their power to make sure that their beloved sport continues its long and storied tradition in the Olympic games.

Jason Belzer is Founder of GAME, Inc. and CSA, and a Professor of Organizational Behavior in Sports at Rutgers University. Follow him on Twitter @JasonBelzer